In May 2017, severe weather battered this area and damaged dozens of local walkways and coastal paths, including Lotus walkway (at the northern most point of Browns Bay beach) and Crows Nest Rise walkway (on the clifftop between Murrays Bay and Mairangi Bay.) ShoreLines contacted John Schermbrucker, Auckland County Council’s community facilities head of project delivery, and Julia Parfitt, chair of the Hibiscus and Bays Local Board, to find out how repairs are progressing.

“There were more than 100 ‘failures’ region-wide caused by those storms,” explains Julia. “It has taken an amazing amount of time to get the repairs and renovations for Lotus and Crows Nest Rise under way, but both of these walkways are complex projects and the simpler jobs were prioritised.”

Restricted and narrow access, geological structure, and underlying infrastructure are three of the challenges which have to be addressed. Gaining consents and sourcing funding is not straightforward, and budget is an issue as all of the geotechnical solutions are extremely costly. There’s also the risk of the walkways being damaged by future storm events. Furthermore, Crows Nest Rise walkway is part of the Te Araroa Trail and is vulnerable to coastal erosion.

Above all else, safety is paramount: site safety and user safety. Walkers are urged not to ignore warning notices nor clamber over barriers. “I do understand the frustration,” says Julia, “but please don’t do your own ‘internal assessment’ and decide that it’s safe.” She has received correspondence from locals, concerned that the walkways are being permanently closed rather than repaired. “Let me assure you, that’s absolutely not the case.”

John confirms that there is tremendous local support for the works being carried out; more than 90 per cent of feedback received by Auckland Council was in favour of repairing Crows Nest Rise walkway. Julia reports that public meetings have been well-attended too, with more than 120 people going to an unofficial public meeting on Mairangi Bay beach, and an even greater number turning out for the Outram Hall official public meeting in March.

The existing structure of Crows Nest Rise walkway was damaged and at risk of falling on to the beach below. It was removed from site in early May. “Site investigations are continuing to assess the stability of the whole walkway,” John comments. “The stairs damaged by the slip will be repaired and that section of the walkway will be reopened by the end of the year.”

In determining the most appropriate way forward, Julia acknowledges the valuable input from “expert residents” – geologists and geotechnicians who have been able to ask highly informed questions and offer professional advice on the projects.

The remediation work on Lotus walkway is now almost complete. It is expected that final recommendations for the repair works to Crows Nest Rise walkway will be presented at the next Hibiscus and Bays Local Board meeting in June. ShoreLines will share updates for this project in upcoming issues. 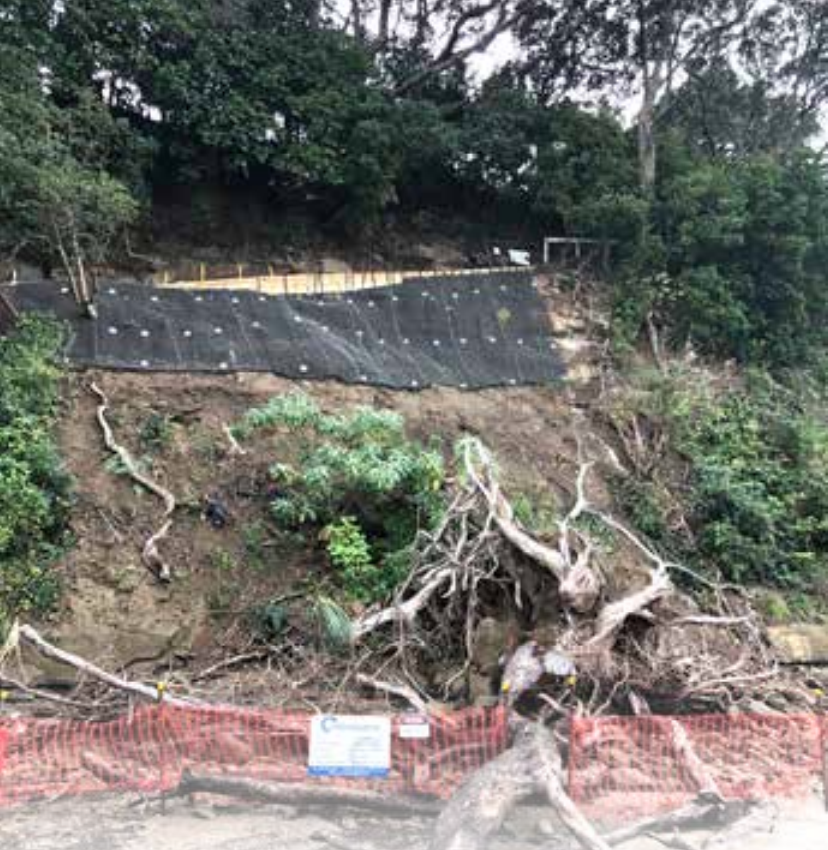 A technique known as “soil nailing” is being used to strengthen and secure the Lotus Walkway structure. “The good news is that, now we’ve the resource consent and the works have been consented, the repairs are happening at a rate of knots,” says Julia Parfitt.