The Brown family who gave the bay its name moved to the area on a sailing cutter in September 1876 from their previous farm in Mt Albert. Peter Brown initially purchased 136 acres of flat land which was then covered in tutu, fern and ti-tree. He transformed the land into a working farm with an orchard, apiary, crops and pastures.

By the 1900’s holiday makers began to travel to Browns Bay via steamer. Peter and Mary Brown initially provided accommodation at their residence. 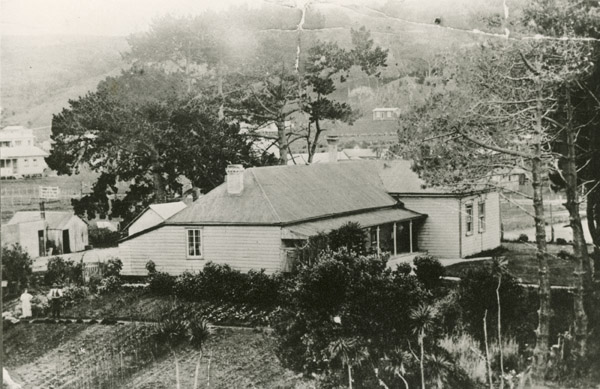 From their guest house, the Browns ran the first local store as well as the postal services. In 1916 the Browns sub-divided their property, giving visitors the opportunity to buy their own piece of paradise for a mere 100 pounds. As the number of properties grew so did the transport systems. By the 1920’s there was a regular bus service connecting the ferry at Bayswater.

As well as an influx of holiday makers in the summer, the number of permanent residences also grew rapidly. To support the growing population, Browns Bay acquired new stores, churches, a permanent school and numerous clubs. At this point, Browns Bay was the commercial hub of the East Coast Bays.

The tipping point for Browns Bay transforming into a suburb of Auckland rather than the beach resort it once was, occurred in the late 1950’s with the completion of the Auckland Harbour Bridge. Browns Bay was connected with the city of Auckland and it hasn’t stopped growing since.

Browns Bay is lucky enough to have a vast amount of history available to be seen within its community. Whether you are a local who would like to get to know your area’s history, or a visitor interested in how Browns Bay developed into what it is today, this heritage trail is a great way to spend an afternoon. The guide below contains directions to 27 historical sites within Browns Bay and information on the history of these sites. Even if you don’t physically do the heritage walk, the guide makes for a fantastic read.

During the 1950’s the East Coast Bays Borough council built a roller skating rink, this became a popular attraction, especially on Saturday nights. Men’s and Women’s speed skating would run as well as a men’s hockey game. This was a great social occasion for the young and men women to meet. In true 1950’s style, the young women would wear brightly coloured dresses and the men would sport stylish checked shirts, black jeans with an inch of brightly coloured socks showing before their skates. No doubt many matches were made at these social events. 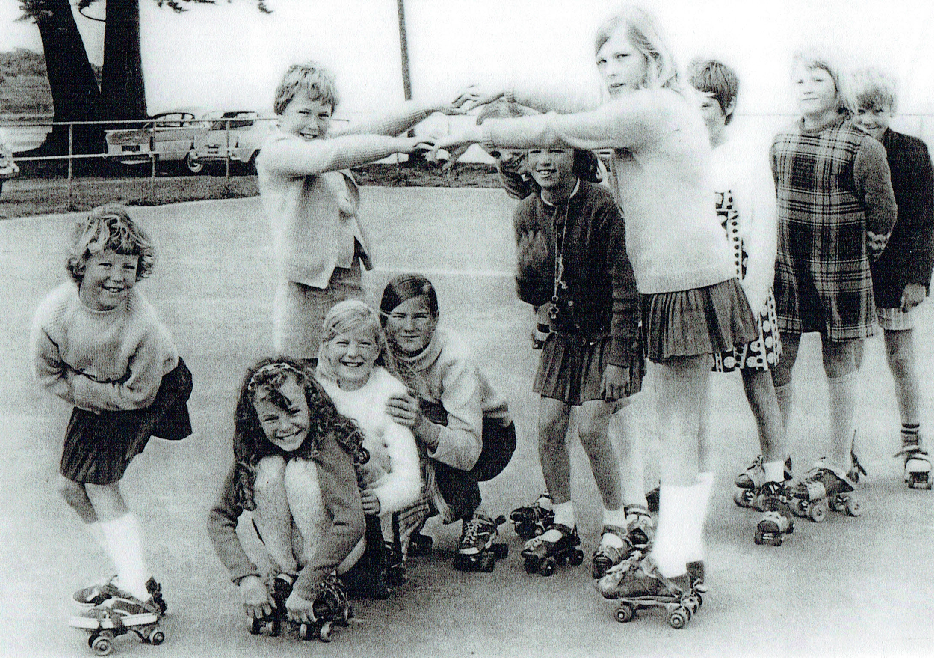 Browns Bay skating rink, where the skateboard park is now. The Whitham and Atkin’s sisters are in the picture.
Ian Morris Collection, Friends of East Coast Bays Library Archives.

The Browns Bay surf club was formed in 1932 to service the beaches from Long Bay to Campbells. Two years late the group was going so strong that a clubhouse was built, and the group was renamed the Eastern United Surf Life Saving Club. They competed successfully many times at the national level however due to falling numbers the club eventually merged with Piha and the clubhouse demolished years later.

The first library of sorts operated out of the Central Store, however, the first public library was not built until 1970. This library housed a relatively small stock of books, however, locals could access books from the larger Takapuna library, books would be sent from Takapuna to Browns Bay on request. The fantastic library we have today opened a short while later in 1982.

The Browns Bay wharf was an important piece of infrastructure in the early days. It allowed passengers and in coming to goods to arrive on the shore safely. The harbour was too low however for the larger steamships that carried the summer holidaymakers. These passengers often had to be row closer to shore in life boats, from there male passengers were expected to roll up their trousers and carry the women to shore. An eventful beginning for many holidaymakers.

In 1936 a severe storm brutally damaged the wharf. It was decided then by the council to demolish the wharf, as modern transport methods had already begun to reduce the need for a wharf in the bay. The photo on the right shows the wharf being battered during this storm. 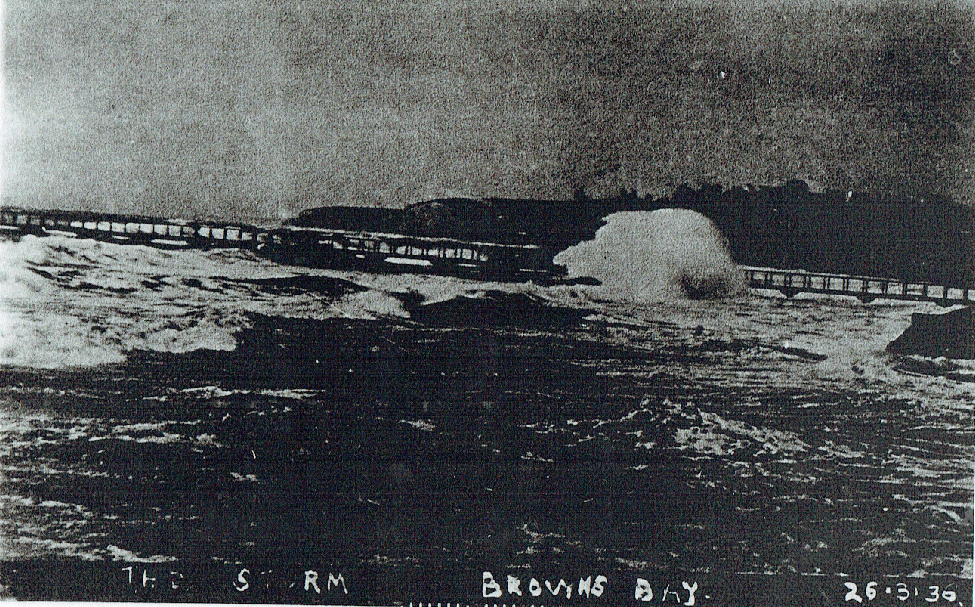 Right from its humble beginnings, Browns Bay has been known for its relaxing beaches, peaceful atmosphere and accommodating community, making it a number one holiday destination for families and individuals alike. We’ve come along way from the campervan & tent accommodation shown below which Browns Bay was famous for in its early days. We now offer visitors a diverse range of apartments, studios, holidays homes, motels and B&B’s. No need to put up with the dreaded cold showers on your holidays any more! 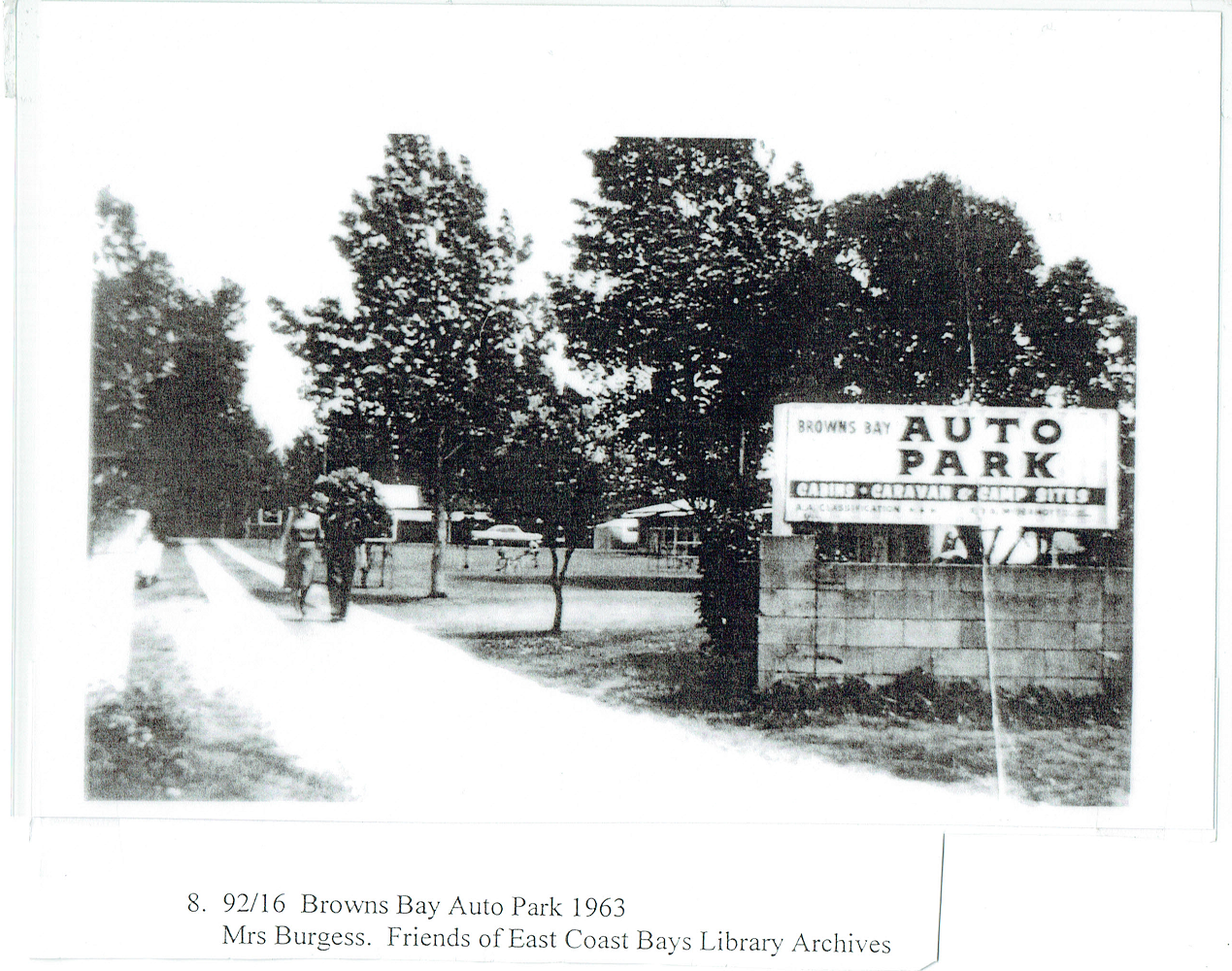 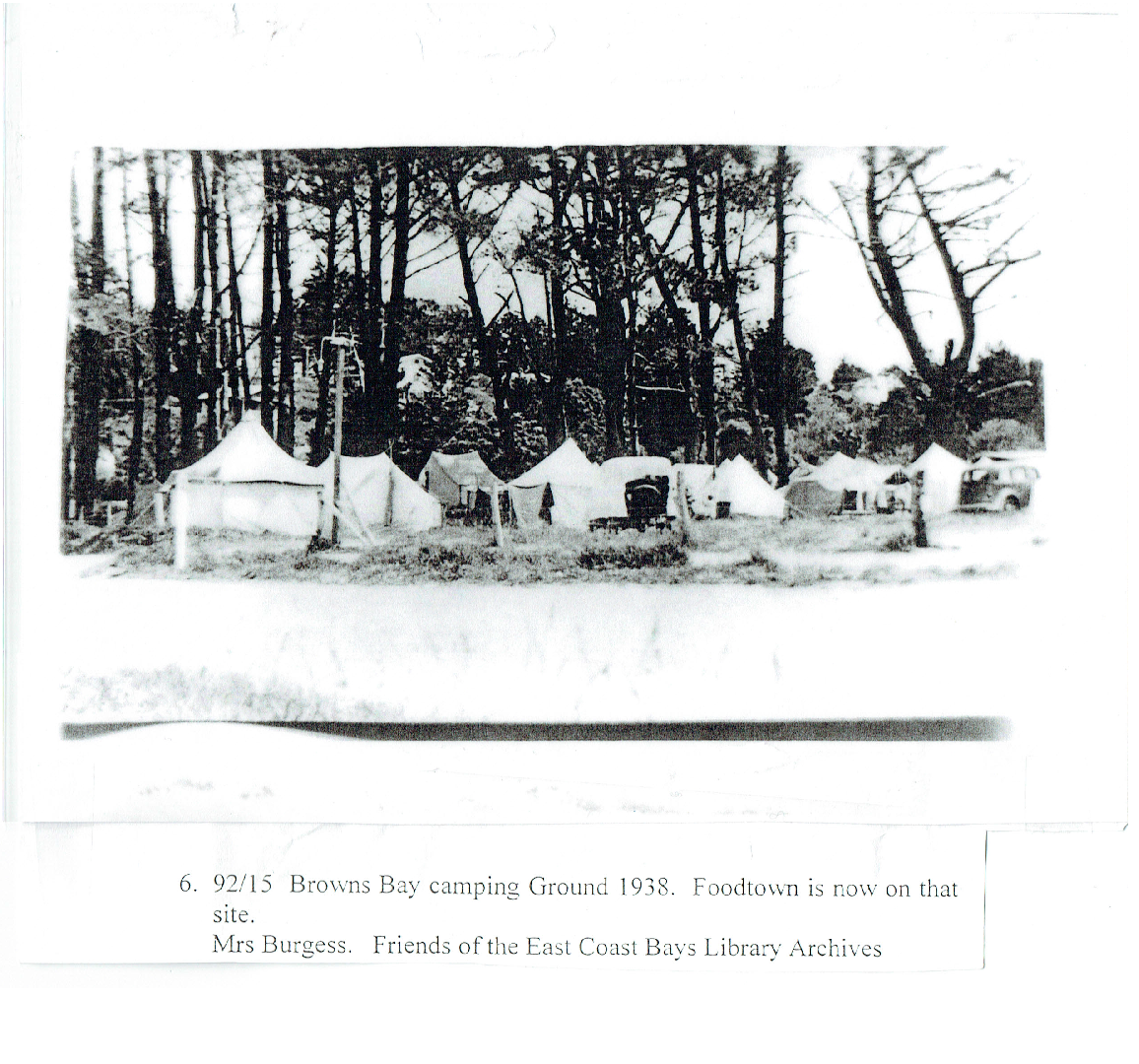 Renting a holiday house is a great option if you are looking to stay for an extended period. There is a number of homes in and around Browns Bay which you can rent at various times of the year. To find a home that suits you, there are a number of directories online. Check out the few below to find out what Browns Bay has to offer! 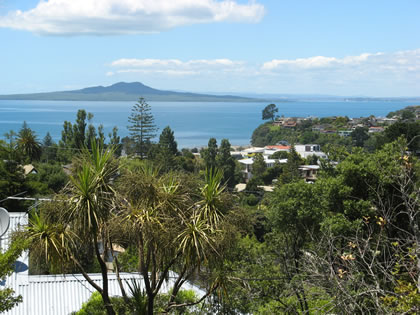 During the 1920’s, the development of Browns Bay quickly accelerated. The 555 Cabaret and Cinema would attract hordes of yachties and all kinds of notorious characters. Occasionally times would get a little hectic, it was reported that one night five ambulances were required to take the injured away. These were the years of much socialising and jollification, hence the Bay was often referred to as the “Naughty Bay”. Luckily Browns Bay quickly grew out of these troublesome years, although we’ve never forgotten how to have a great time either.

Over the past 100 years, Browns Bay has developed dramatically in order to accommodate the growing number of permanent residence. Today we have around 4000 residents and over 200 businesses within the area. To check out the businesses situated in Browns Bay, take a look at our Browns Bay Business Association Member Directory. 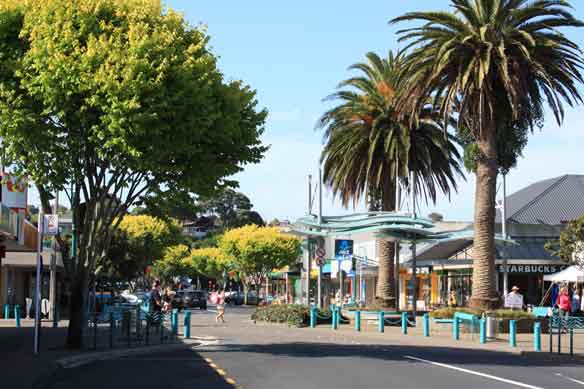 Browns Bay has everything covered, it really punches above its weight in terms of the services and facilities available to locals. There really is no reason to shop outside of Browns Bay, so make sure to come to support your local business owners and community groups! You’ll be surprised at what is sitting right on your doorstep.