The beachfront of the future? La playa del futuro? 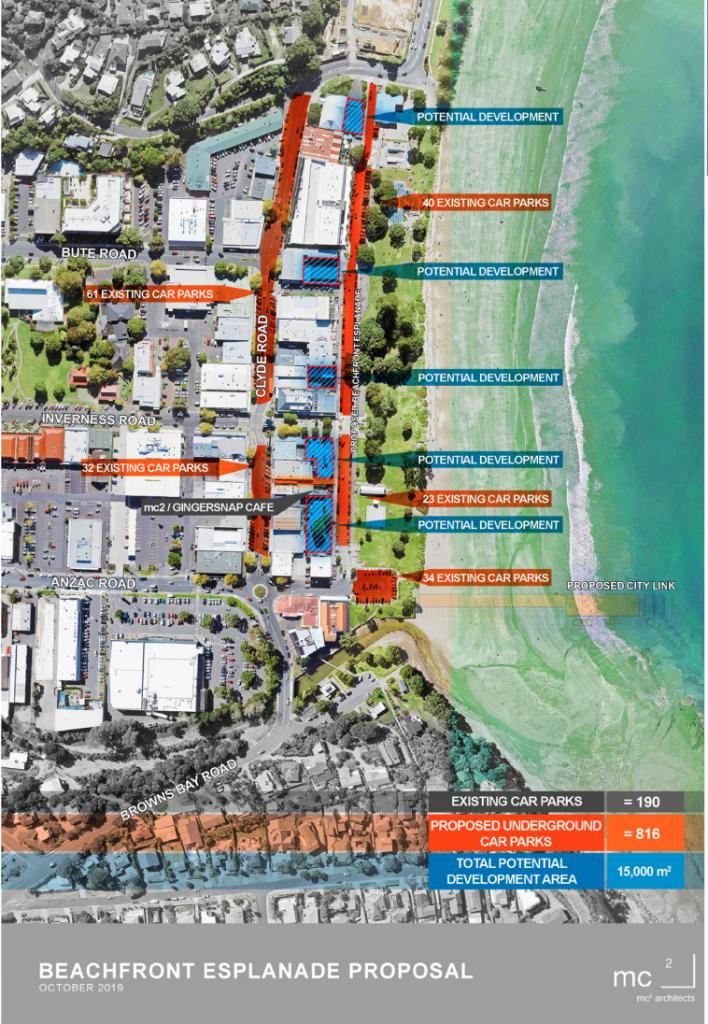 The beachfront of the future? Could Spanish design innovation inspire a solution to the village’s car parking conundrum – and reinvigorate the heart of the town?

After reading the article about Browns Bay’s wharf in the Feb/March issue of ShoreLines, Anne and Rick Dezoete contacted the magazine, saying:

Yes, to a wharf but of course there needs to be adequate parking preferably underground – very expensive. However too many things in our country are band aid remedies which don’t work. We need to look ahead a few years. The traffic congestion is already horrific.

Architect Joe McCambridge is sympathetic to these views.

He has lived in Browns Bay for nearly 25 years, and, in common with other residents, has witnessed and experienced the increasing challenge of car parking in the village. “Efforts to alleviate this stress tend to focus on small solutions (for example: creating three spaces where there is currently one) rather than taking a broader – and potentially more daring – approach,” he says.

Having travelled through Europe, Joe thinks Spanish architectural innovation could be the answer! “In September, during a road trip from Barcelona to Santander, I was struck by the similar design concepts of car parking in Spanish historic towns. From Zaragoza to Oviedo, historic towns all had underground car parking in their town centres.”

Joe then headed further north towards the Atlantic Ocean coast. “San Sebastian had a four-storey underground car park which linked the users with the promenade facing the beach. This had a further advantage as it meant there was no need to cross a main road to gain access to the beach. Furthermore, part of the beach’s sea wall was the car park structure.”

In other words, underground car parking gave tourists and locals easy access to workplaces, and retail and hospitality providers without compromising the towns’ distinctive and historic features.

Could this idea be applied to Browns Bay? Joe believes so and has tentatively worked on design concepts for this ambitious project.

He hopes that it would not only sufficiently address present and future parking problems, but act as a stimulus for the village, enabling a resurgence in the hospitality and retail areas.

Joe raises health and safety concerns too. “Since 2015, I’ve run mc2 architects within our coffee/gelato shop (Gingersnap) from Beachfront Lane. Over the last five years I have seen issues with vehicles travelling too fast on Beachfront Lane, especially during the summer and at weekends. I fear it will only be a matter of time before a child or animal will be injured by a speeding vehicle as they try to get to the beach.”

The underground car park would add 850 spaces, meaning that, if Browns Bay wharf were to be reinstated, ferry commuters could take advantage of these during the working week.

Moreover, the underground structure could provide the added benefit of a manmade sea wall.

This project could also help tackle a potentially overlooked challenge: that of perception. “The word ‘lane’ implies service or private access, which is why I’d like to see Beachfront Lane transformed into Beachfront Esplanade. Then it’s no longer a barrier to the sea, but part of a thriving hub that links ocean with town.” He can envisage the aesthetic and economic benefits of this. “It’s about beautifying the whole front, and encouraging that flow of foot traffic from beach to hospitality to retail.”

Joe is a highly experienced architect but concedes that he is not a geotechnical engineer, and therefore cannot speak with complete confidence about the suitability of the area for underground works. That said, the topography of the land is basically flat and infrastructure issues (e.g., water pipes) are commonly addressed in other major construction developments.

He reflects on the alternatives. “We can’t keep parking further and further away ‘down the road’ because it becomes simply impractical. And, do we want to see a multi-storey car park on the village green? Absolutely not!”

As a member of Browns Bay Business Association, Joe has attended numerous meetings where car parking issues have been on the agenda. “I have been lucky to see examples of how this problem can be elegantly solved with underground parking and I firmly believe that this is the way forward for our town.”

With Joe at the helm, mc2 architects will continue to explore this concept and will be preparing new designs, with 3D images and fly-throughs of the proposal, over the coming few months.